A New Color to be Added to Mid-Atlantic Transit: the Maryland Purple Line
03.08.2016
Posted in P3s, Rail and Transit

On March 2, Governor Larry Hogan and Maryland Department of Transportation (MDOT) Secretary Pete Rahn greenlighted procurement of the Purple Line by MDOT and the Maryland Transit Administration (MTA). The contract has been posted and is scheduled for review by the Maryland Board of Public Works in early April. 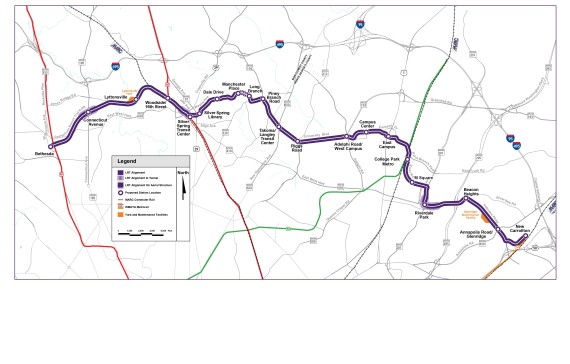 Part of the region’s ambitious transit strategic plan, the Purple Line is a 16.2 mile, 21 station light rail line that provides additional mobility to the region. MTA estimates total daily ridership will be 69,000 per day by 2030 (74,000 by 2040). The new line will interface with the DC Metro system’s  Red Line (at the Purple Line’s western terminus by Bethesda Station and again at the Silver Spring Transit Center), Green Line (at College Park, home of the University of Maryland) and Orange Line (at New Carrollton, the Purple Line’s eastern terminus). Metro was originally conceived as a way to move federal employees and affiliates between the suburbs and downtown Washington D.C. With the Purple Line, residents of Maryland’s Montgomery and Prince George’s Counties can use rail transit to move around the District without having to go through the District. The New Carrollton station is roughly three o’clock on the infamous Washington D.C. Capitol Beltway (U.S. I-495) and the Bethesda station sits at roughly ten o’clock. The Purple Line will also connect to three Maryland Area Regional Commuter (MARC) rail lines – the Brunswick Line (at Purple Line’s Silver Spring Transit Center station), the Camden Line (at College Park, home of the University of Maryland) and the Penn Line (at New Carrollton). At New Carrollton, the Purple Line provides a connection to Amtrak, elevating regional transit connectivity at New Carrollton Station to a level that is second only to Washington D.C.’s Union Station.

Various third party stakeholders will also benefit from the project, which includes development of the Capital Crescent Trail in Montgomery County and bikepath and other improvements at the University of Maryland.

Formal procurement of the Purple Line project began with issuance of a Request for Qualifications in November of 2013. After evaluating Statements of Qualification, MDOT/MTA shortlisted four potential proposers, and issued a Request for Proposals in July of 2015. All four proposers submitted responses. Following rigorous evaluations, MDOT/MTA determined that the proposal submitted by a consortium of P3 mainstays, Meridiam, Fluor and Star America (the Purple Line Transit Partners or PLTP) offered the best value and selected PLTP for negotiations. Fluor leads the equity members of PLTP with a 70% interest in the project, and through subsidiaries, teams with other construction and operations/maintenance companies throughout the term. Fluor’s experience with transit P3s includes the Eagle P3 project in Denver, Colorado, scheduled for completion in 2016. Meridiam holds a 15% interest in PLTP, investing its domestic pension and insurance infrastructure funds in the  Purple Line project. Meridiam’s investments in transportation P3s includes six U.S. projects since 2009, including the Port of Miami Tunnel. Star America holds the remaining 15% in PLTP, fresh off its recent success with the first-of-its-kind Michigan streetlighting P3. 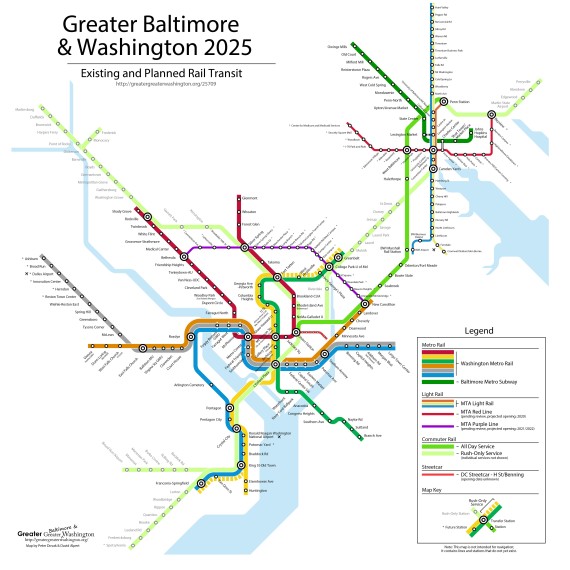 Project construction is expected to begin by the end of 2016, with revenue service commencing in mid-2022. The parties anticipate financial close in mid-2016, including TIFIA and private activity bond financing. Other funding sources for the design-build (construction) period include the State of Maryland’s commitment of approximately $160 million, Maryland’s Montgomery and Prince George’s Counties cash and non-cash contributions, totaling in excess of $330 million, and $900 million in New Starts funding from the Federal Transit Administration, subject to execution of a full funding grant agreement. The State of Maryland will also make availability payments to the concessionaire after the project is open for service, over a 30-year operations term, not to exceed $149 million per year (in 2016 dollars). Total costs for the project over the entire anticipated 36-year term exceed $5 billion.