Gold Line Foothill Extension to Open in Spring 2016
By Nancy Smith on 08.25.2015
Posted in Rail and Transit 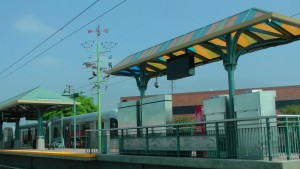 At the dedication celebration for the Gold Line’s Arcadia Station last weekend, Phil Washington, the CEO of the Los Angeles County Metropolitan Transportation Authority, said he expects passenger service on the Gold Line to begin next spring. The exact date for start of service will be announced after the system is turned over to Metro for testing. Arcadia Mayor Gary Kovacic, who emceed the event, made a point of telling Mr. Washington (who recently moved to Los Angeles from Denver) that spring begins much earlier in Arcadia than in Denver, perhaps as early as December or January.

I am looking forward to riding the system in the spring.