Commonly when we think about state government owned railways, the image of commuter or light rail operations come to mind.  But many states own freight railroads as well.  In a few instances a state may have started its own line, while in other situations a state may have stepped in to preserve a rail line from abandonment. 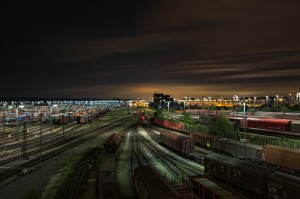 The Oklahoma DOT has issued a request for proposals to sell its Cowboy Sub between Pawnee Junction, Oklahoma and Stillwater Oklahoma.  The Cowboy Sub currently serves three customers and ships 640 cars per year ranging from industrial products to agricultural commodities and limestone.  Service is provided on the Cowboy Sub by the Stillwater Central Railroad through a track lease and operating agreement which is scheduled to expire at the end of 2017.

The Oklahoma DOT is also seeking to sell its Blackwell Sub from Hunnewell, Kansas (on the Oklahoma/ Kansas border) to Blackwell, Oklahoma.  Oklahoma DOT originally purchased the Blackwell sub from the Central Kansas Railway L.L.C. in 1997.  The current operator of the rail line is the Blackwell & Northern Gateway Railroad Company, Inc.

The Department is considering the sale of the rail lines in order to increase economic activity utilizing private operators, sustain rail access, and enhance customer service on the lines.

Oklahoma DOT has experience in preserving and then returning rail lines to private ownership.  As of 2014, Oklahoma had acquired 882 miles of rail lines.  Approximately, 749 miles of which have since been sold back to the private sector.  A notable Oklahoma DOT line sale was the Sooner Sub line, sold in 2014.  The Stillwater Central Railroad purchased the Sooner Sub for $75 million which included financial commitments to improve track infrastructure as well as a passenger rail service pilot program.   The line extends from Sapulpa, Ok to Midwest City, Ok, a span of approximately 100 miles.

Oklahoma provides an example of a state returning rail lines to the private sector after the state preserved the lines from abandonment.  Other states may follow the Oklahoma model, especially in areas with rail infrastructure historically utilized to transport coal.  As coal shipments decline, Class I railroads are already shuttering rail lines and rail facilities dedicated to coal.  If these rail lines are to be preserved, states may need to get into the railroad business.